Cave Passage – “The Eyes Of God” – a map in Google Maps

There are places where one feels closer to the divine beginning. We call them by different names but their essence is one – the highest form of energy in the world. It is where the darkness gives way to life. In the magic of birth, the beauty of love, the wisdom of nature… This energy can be felt, but not captured. Perhaps it is always close to us, but we are allowed to touch it briefly – in specific locations and in specific life situations. It is a gift – not a given. Therefore we have no right to own it, we can only be grateful for the moments in which we feel it near us.

From Sofia you go on Hemus highway and from there alongside Pravetz and Yablanitsa you take the road to Lukovit. Reaching the village of Rumyantsevo we make a detour northwest following the signs for Karlukovo. According to the GPS the whole distance is around 115 kilometers. There is the longest cave tunnel in Bulgaria with its 365 meters length and 56 meters height at the entrances. The cave is naturally lit due to the erosion on the ceiling in its central hall where it’s riddled with leaking water, forming  the phenomenon “Oknata” or “The Eyes of God” – two mostly identical in size holes with the shape of eyes.

One of the most interesting mountain monasteries is the Glozhene Monastery, located about 10 km. from the village of Glozhene in Teteven area. Unlike the others he is not sheltered in the bosom of the mountain ranges but is located on a high stone terrace, separated from the environment with steep cliffs.
The monastery was built in XIII and renewed in XV-XVI century. It attracted visitors from Bucharest, Focsani and Craiova in Romania. According to unconfirmed written testament it was founded by the Kiev Prince George Glozh who haunted by the Tatars moved in these parts with the permission of Ivan Asen II. He founded the village of Glozhene and 1 km from the village – a small fortress and monastery dedicated to Sveto Preobrazhenie? (Св. Преображение). It seems that the monastery existed until the arrival of the Turks (and according to some sources until the XVII century.) then it was abandoned.
The monastery was visited by Vasil Levski, who founded the revolutionary committee in Glozhene. Here the merited spiritual, political and cultural activist was held under extremely harsh conditions for nine months in 1893-94. The cell he was held in is now a museum. Levski’s hideout is also preserved and can be seen.

Geopark Iskar-Panega is a really lovely and charming corner of Bulgaria. It is located in the municipality of Lukovit and consists of two areas – Landscape Park “Panega” and Karlukovski karst complex. This is the first Geopark of its kind created on the territory of our country. Many people might wonder what is meant by the term “geopark”. In short, it is a place where are collected many objects of geological, geomorphological and paleontological type which also have cultural, historical or natural value.
The beginning of Geopark “Iskar-Panega” is near the road Sofia-Pleven-Ruse, shortly before Lukovit. From here on begins the first in Bulgaria Riverside Landscape Park “Panega”. The route follows the valley of the river Panega, a confluent of Iskar. The river originates from one of the largest karst springs in Bulgaria Glava Panega. In the area of Kotlen near the town is located the most pronounced and impressive old meander in Bulgaria, called by the experts “old lady”.
The huge amphitheater of the Kotlen meander is so impressive that different rock formations have received local names: Radetski Ship, The Nose, Delvata, Rezeto, Vartopa. There is a belief that the water, vegetation, shape and rocks in this place, create a special life habitat and natural energies who can heal and help in relieving migraine and nervous tension. On a rocky slope, on a wooden platform one can pass over the river entering into a short but spectacular canyon.
Here is Panezhkata Dark Hole with its spring – an unexplored cave, shrouded in speculation. All around is a perfect blend of enchanting scenery, bizarre rock formations and dense forests. 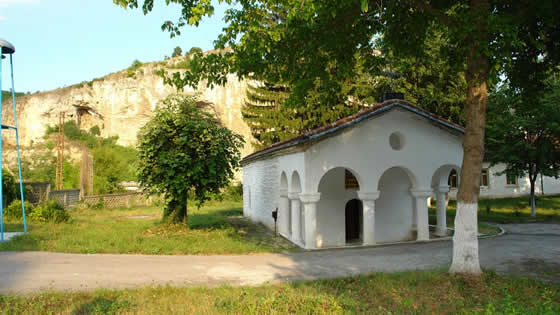 The existing and well known today monastery “Uspenie Bogorodichno” is situated near Karlukovo, 8 km from Lukovit, among Iskar gorge. According to historians in this area were Thracian and Roman sanctuaries. During the Second Bulgarian kingdom the monastery is known as “Viktorova laka,” but because of the many ruins of the monastery, around it arise rock monasteries that are within two kilometers of each other, on both sides of the riverbed.
Destroyed during the Ottoman invasion, the monastery remained in desolation for centuries. Restored at the end of XVI century, probably in one of the forced conversions to muslim of the Pavlikeni villages in this region of the country, he was again ruined by their oppressors. Karlukovo monastery raised for a new life only in the first half of XVII century. The event was witnessed by the famous carver “daskal” Uros, who in the year 1735 carved the large wooden iconostasis of the church. Later, in 1834, after yet another destruction of the monastery, he was again raised by means of the patriotic chorbadji Stoyan Chalakov from Plovdiv who had property in these areas. In 1877, during the Russo-Turkish war, retreat Turks ravaged the monastery one last time.
In the vestibule of the church are painted mostly scenes from the Mother akathist and the wisdom of John Chrysostom. Comparing the frescoes in the nave with those in the hall, it is difficult to establish a difference in the style and the color vision of painters and mainly the modeling of human faces. This gives reason to believe that the overall painting of Karlukovo monastery church was the work of at least two master painters. Unfortunately, they left no written notifications nor about themselves nor about where they studied art.
Along with murals in Karlukovo monastery church there were many icons assessed as remarkable works of iconographic art. Small iconostasis icons framed in medallions arouse interest in facial characteristics and vitality of images. Especially valuable are the big iconostasis icons, some of which are drawn from Samokov painter Dimitar Hristov Zograf (1769-1860g).